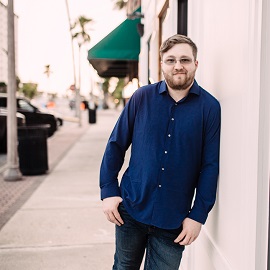 Levi Hardy was born into a military family in Copperas Cove, Texas. Months later, he and his family moved to Panama City, Florida where the whole family went into the ministry. Feeling led to re-move cross-country, Levi (age 8 at the time) moved to Boulder, Colorado to further pursue the call of God on their lives which they did for nearly 17 years. After which, the whole family decided to open a coffee shop which Levi ate up and became quite adept at. Finally, though, after years of pursuing God and making coffee, Levi and his whole family decided it was time to move back and spend time growing closer with their family.

After the move back to Panama City, Levi thought now might be the perfect time to start his dream of getting involved in the ever-expanding world of Real Estate. After a life of wild and wackier endeavors raging from becoming an NRA certified Firearms instructor, winning a State Yoyo tournament, a drummer of nearly 20 years, being a salesman for an international paint company & having over 80,000 lattes under his coffee making belt, it’s safe to say Levi is prepared for nearly every situation. (Seriously though, ask him about his yoyo. He's probably carrying one in his backpack.)

Understanding the spelling of Colonel

Are you ready to buy, sell, or invest in Bay County, Florida?
Call Levi Hardy, Realtor with Think Real Estate.